Startup lessons from the Dead

From my teenage years through my adult life, I’ve been following the Grateful Dead. On its face that might seem difficult, since I was only eleven years old when Jerry Garcia died and the Dead broke up. But as the Deadhead motto goes, “We are everywhere.”

I first truly “got” the Dead when I saw Phil Lesh and Friends perform at the Maritime Hall in San Francisco during my junior year of high school. I’ve been on the bus ever since. I’ve been lucky to see Phil, Bob Weir, and the other surviving members perform dozens of times along with countless tribute groups. And now, thanks to John Mayer and streetwear crossover, the Dead continue to be relevant in pop culture.

While I’ve followed the Grateful Dead’s music, I’ve also learned many lessons from them. The Dead were business pioneers as much as they were musical icons. Jerry and company followed an innovative path as they forged their brand, style, community, and legacy. As I’ve built two startups and advised many others, I’ve found myself returning to some of these lessons to inform my thought process.

There have been other articles and books written on this topic.  There is much to take away from the Grateful Dead phenomenon. The great thing about music or any creative pursuit, is we can each take something different from it and form our own interpretation.

Jerry Garcia and Bob Weir were polar opposites. Jerry played lead guitar like no one else. Full stop.  He mastered styles from bluegrass to psychedelic freakouts. His ability to emote with his instrument cut right to the soul.

Bob’s rhythm guitar playing is, well, weird. There’s a whole subset of Dead fans who question whether Bobby’s playing is even audible in the mix of most shows. He’s known for unusual chord framings. His guitar sound on it's own can be grating to the ears. There’s a YouTube video that isolates only Bob’s playing during an 80’s show that confirms this.

And yet, Bobby’s odd rhythmic approach complements Jerry’s leads perfectly. In Jerry's own words: "Weir's ability to solve [musical] problems is extraordinary. He also has a beautiful grasp of altering chords and adding color. Harmonically, I take a lot of my solo cues from Bob." Polar opposites. Yet together, they just fit.

In startups, I’ve learned the value of finding these complementary partners. You need people with unusual talents that fill in the gaps in your knowledge and ability. They provide the foundation for you to do your best work.

Whether you’re looking for a co-founder or recruiting for your next big hire, resist the temptation to find someone who acts or thinks like you. Find the partners who do things differently. Look for someone who knows to zig when you zag. You’ll have better chances of making beautiful music together.

Look for the space between the notes

Claude Debussy, the French composer, famously said, “Music is the space between the notes.” He wasn’t referring to the Grateful Dead – he died nearly fifty years before they formed – but he may as well have been.

The Dead’s music is a symphony of chaos. No song ever sounds quite the same, and their jams can ebb and flow in unexpected directions. In an instant, a song can turn on a dime from violent noise to cathartic bliss.

For all of their freewheeling improvisations, the beauty they achieve is in how each player fits into the groove. Finding their place, they give the music room to breathe. Listen to any transition from “Scarlet Begonias” into “Fire on the Mountain” and you’ll get the idea.  If you’re confused on where to start, just play Cornell 5/8/77.

When you’re running a business, it’s easy to pack your schedule solid with meetings, Zooms, and pile up task after task. Founders and business authors have created a whole cult of productivity focused on squeezing more and more into your day.

To innovate, you need to find creative space to let your thoughts run free. When you carve out the time, things open up. You reach a flow state where the real breakthroughs can happen. There’s a reason those light bulb moments always happen when you're in the shower or out for a long walk. Seek out that space between the notes, and you’ll be better off for it.

The Grateful Dead have always been a polarizing force in music and culture. The things about them that the critics love to deride – the long meandering jams, the sometimes sloppy musicianship, the weird freak show of an audience – are the things that the fanbase finds most irresistible.

Even now, with the Dead in a cultural renaissance, it’s an easy hipster trope to make fun of the Dead’s indulgences and their fans’ unwavering allegiance. Hate on us all you want. We just don’t care. Because we found our licorice, and we really fucking love licorice.

As you build a company, a product, and a culture, seek out the niches that provoke that kind of love/hate reaction. Your goal should never be to be everything to everyone. That only waters down your product and makes it bland. And there’s nothing worse than being bland.

Instead, lean into what makes you different. If what you’re doing brings out the critics who say you’re doing it wrong, then you’re probably on the right track. As long as you also have people who love what you’re doing. Ignore the haters. Listen to your audience. Be their licorice.

Give a reason to keep coming back

Serendipity and novelty are powerful forces. Together they fueled the Grateful Dead through decades of touring and thousands of concerts. They're what keep people like me seeking out new interpretations of their music today, 25 years after they disbanded.

Every show has a different setlist. Each jam has the potential to veer in any number of directions. You might find bliss, or you might face your darkest fears. Or you might just catch a bad show.

You can harness the powers of novelty and serendipity to motivate your team and delight your customers. As you’re building a startup culture, think about how you can balance process with experimentation. Allow your team the freedom to bring ideas to the fold that can take you in unexpected new directions. Find ways for collaboration to happen across disparate teams.

Remember that every job is just a job. We all struggle at times to motivate ourselves to come to work every day. But creating that space for novelty and serendipity can help a team overcome that monotony. And that will move your business forward in surprising ways.

As you’re building your product, find ways to reveal new wrinkles to your audience. Give them a reason to keep coming back. Develop a voice that winks and nods to your audience. Iterate on features in unexpected ways. Leave easter eggs that only the most dedicated power users will find. People love when you reward their dedication. Find a way to do that, and that will create deeper connections.

Know the right time to step away

The Dead learned this lesson the hard way. The band never had a succession plan. As they exploded in popularity in the 80’s and 90’s, the demands on the band members grew.

Jerry, already a reluctant leader, buckled under the pressure of a massive fanbase, a grueling touring schedule, and the sprawling business operation supporting it. He coped with heroin. The addiction crippled him. Despite many attempts to get healthy, he succumbed to his habit in 1995.

Starting and running a business can be all-encompassing. If you’re lucky enough to have success, the stress and complexity only increases. When you hit the inevitable struggles, you can burn out. Or worse.

The startup world loves to glorify “hustle” and throw shade on work-life balance. I used to buy into this. In the Bleacher Report days, I would tell my wife, “The internet never sleeps” when dealing with yet another late night crisis.

I’ve learned over the years that this isn’t sustainable. No crisis looms so large to let it take over your life. No failure is insurmountable. You need to find an ability to to turn it off. You need a succession plan. You need a path to sustainability.

There’s more to life than your startup. If you let your work consume you, one day you’ll wake up to find out your life has passed you by.

Tag: Startups, Music
The link has been Copied to clipboard! 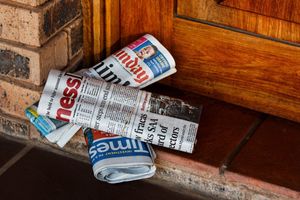 Why media companies should be direct to consumer

The arrival fallacy: What it feels like to sell your company